This German video is amazing. A joyously analog interpretation and deconstruction of the digital gaming experience. Malte Jehmlich is as primitive and inspiring as the the Vanuatu natives who devoted themselves to cargo worship after World War II!

Try to imagine. It's 2010 and video games have yet to reach Malte's shores. Still, with the aid of videotaped news footage and Chinese Whispers games, Malte and his kin have a primitive inkling of the gaming euphoria that they are missing. Team "Racer", led by designer and creator Malte Jehmlich have managed to create the next best proxy for now: a real world video game kart racer!

RACER is an analogue recreation of a computer racing game in the style of the classic WipeOut.
It consists of a modified vintage arcade machine, a RC model car with a wireless camera,
an a self-constructed racetrack/game level made entirely from cardboard.

The actions of the arcade player are directly reflected by the remote controlled model car in the level.live video image from the car's perspective  is sent back to the arcade.

They have an updated video on their site titled version 0.2, with new gameplay and screen updates. The most interesting is the implementation of an actual score system and announcements, instead of using tape and markers. 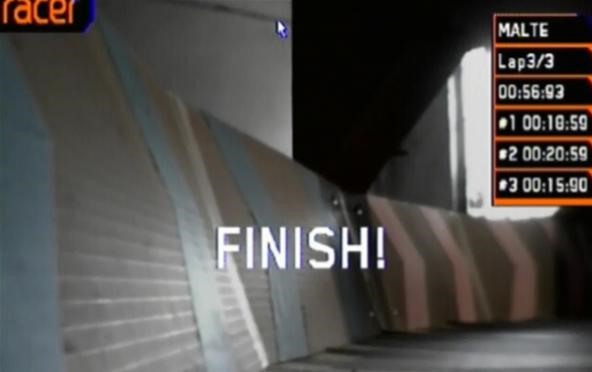 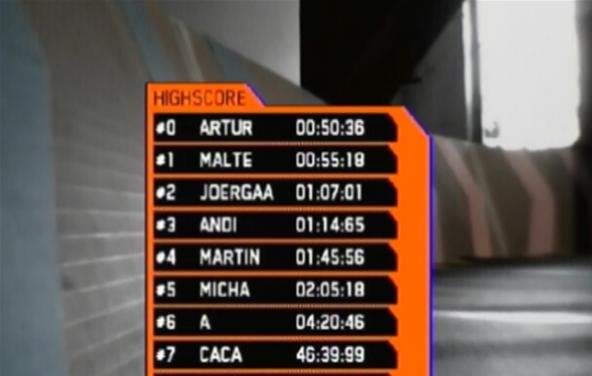 Amazing, isn't it? Most of the time when someone creates a retro project, it usually fails to deliver in real world use. It may look pretty, but that's about all it does. This kart racer, however, looks like something everyone would want to play! Way to go Jehmlich, remembering to keep the project fun!

It took more than a week of research, but I think we've managed to recreate what he's built into a nice and easy HowTo:

Step 1 Go to RadioShack and buy a remote control car.

Why are they still in business?

Step 2 Borrow a friend's cell that has a built in camera.

Odds are that this experiment will go horribly wrong, so don't take a risk with your own property. Droid and iPhones have excellent cameras that broadcast video at acceptable levels. You can check if they have insurance on their phone, but that's optional.

Step 3 Tell coworkers you are moving & need to borrow lots of cardboard boxes.

That cardboard track isn't going to make itself. Rather than fighting it out with the local homeless person for their cardboard, lie to your coworkers and ask for any unused cardboard boxes for this project. When they ask for them back, just say they were burned in a tragic fire and to "suck it".

Think Detroit, or any slowly disappearing Midwestern town. With the current housing economy and vacancies, this shouldn't be a problem. If you don't quite know if the building is deserted, break in to make sure. 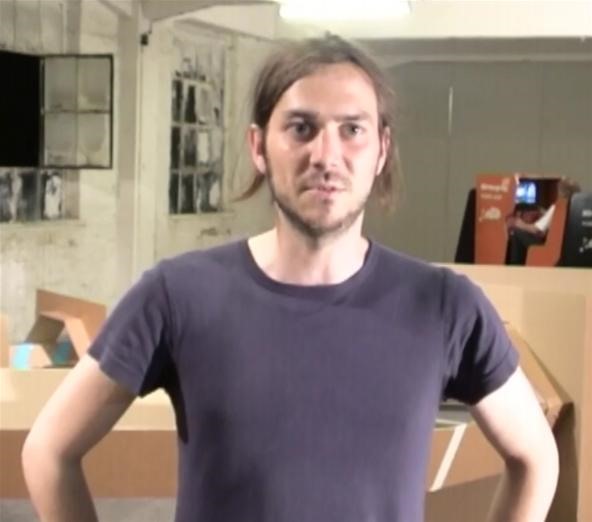 That's Malte Jehmlich, the creator of Racer. The round trip flight to Europe and the dozens of international laws you'll be breaking will be well worth it once you get this 3 minute game going. Remember, artists are weak-willed, it shouldn't take more than half an hour to break them.

Or you could just take the oh-so-boring way out and invite him as a guest in an all expense trip to your place so he can supervise your work (yawn).

Want to know what Americans were doing while Jehmlich was making the coolest video kart racer in the planet? Well, not to brag, but I think we just one upped him!

Want to master Microsoft Excel and take your work-from-home job prospects to the next level? Jump-start your career with our Premium A-to-Z Microsoft Excel Training Bundle from the new Gadget Hacks Shop and get lifetime access to more than 40 hours of Basic to Advanced instruction on functions, formula, tools, and more.

Other worthwhile deals to check out:

Join the Next Reality AR Community

Get the latest in AR — delivered straight to your inbox.

Reminds me of that movie gamer, where a player controls a person and goes into combat.
I would love to try this, or make my own or something.